The client required real-time management of the grid infrastructure, which was quick, reliable and efficient. The client was using an OLTP (DB2) system with on-premise DB2 RDBMS infrastructure in the backend. A query to the DB2 database was required every time to extract data for any ad hoc data requirement or for analysis. The current infrastructure did not support MIS requirement and especially ad hoc analysis.

Valiance proposed to develop scalable Data Lake on top of AWS cloud infrastructure that would allow different business units and stakeholders to access insights across multiple sources of information whenever required. This data analytics infrastructure would bring all the data at one place; perform ad hoc analysis and be future-ready for more sophisticated predictive analytics workloads leading to smarter operations. Proposed platform comprised of following key components.

Technical Architecture (based on AWS) 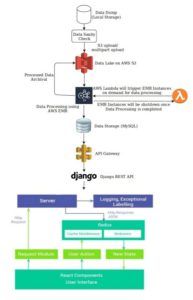 Key highlights of the solution